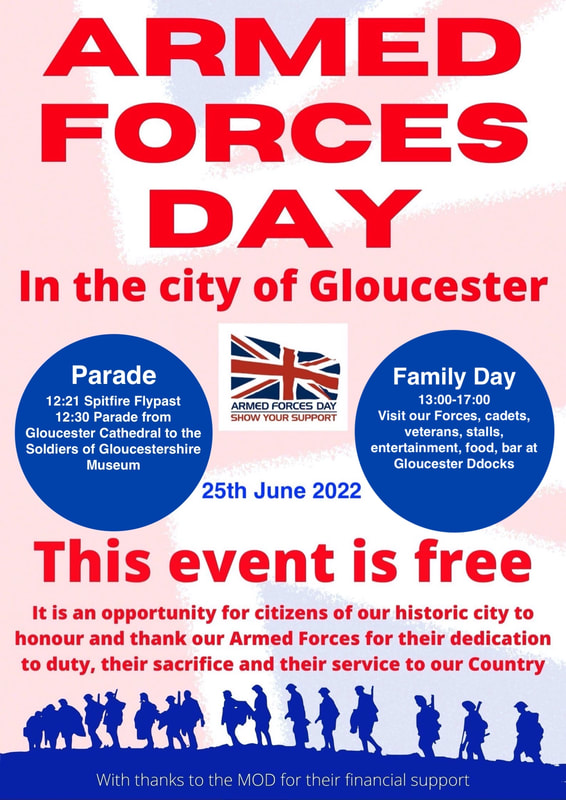 What is the day all about?
Armed Forces Day is a chance to show your support for the men and women who make up the Armed Forces community: from currently serving troops to Service families, veterans and cadets.

Featuring a Military Band - the British Army Band TIDWORTH (incorporates The Royal Artillery Band, The Band of the Corps of Royal Engineers and The Band of the Adjutant General's Corps).

FAMILY DAY AT GLOUCESTER DOCKS
From 12:30 to 17:00
Come and meet our Forces, visit the stalls & displays!.  Stalls include include: RBL, SSAFA, H4H, RAFA, WRENs Assn, the SOGM, the Rifles, Air Cadets, 501 Sqn RAF, Freemasons, others are being added including representatives of the County Council and NHS in relation to the Armed Forces Covenant and Veterans support services respectively.
There will be entertainment from the Military Band, and local entertainers Tyler Evans and Georgia-May Matthews.

PLEASE NOTE; ANYONE PLANNING ON USING A DRONE TO CAPTURE PHOTOGRAPHS AND/OR VIDEO.
ALL FLYING IS NOT ALLOWED FOR ONE HOUR BEFORE THE FLYPAST IS DUE (12:21) UNTIL THE FLYPAST IS COMPLETED. IT IS POSSIBLE THAT THE AIRCRAFT WILL MAKE MORE THAN ONE PASS OVER THE CATHEDRAL SO PLEASE ENSURE IT HAS DEPARTED BEFORE DEPLOYING ANY DRONES.

Sponsors
You can sponsor us via direct bank transfer or cheque and have the chance to win some money via the Gloucester Lottery, follow the link below for how to sponsor.  We are a volunteer committee and rely on sponsorship and donations to put the event on, any amount is warmly welcomed.

This is a non-profit venture and funds must be raised to organise and manage the day to make it as relevant, suitable, safe and enjoyable as we can. We would be extremely grateful if you would consider sponsoring the event. Any amount you may be able to afford would be welcomed.
Cheques should be made payable to ‘GAFDCC’ (Gloucester Armed Forces Day Commemorative Committee).  Please contact gloucesterafd@gmail.com for the address to send a cheque to.
Bank transfers should be made to Account Number 66475668 Sort Code 30-93-48.  Please quote ‘GAFD’ when paying by bank transfer. 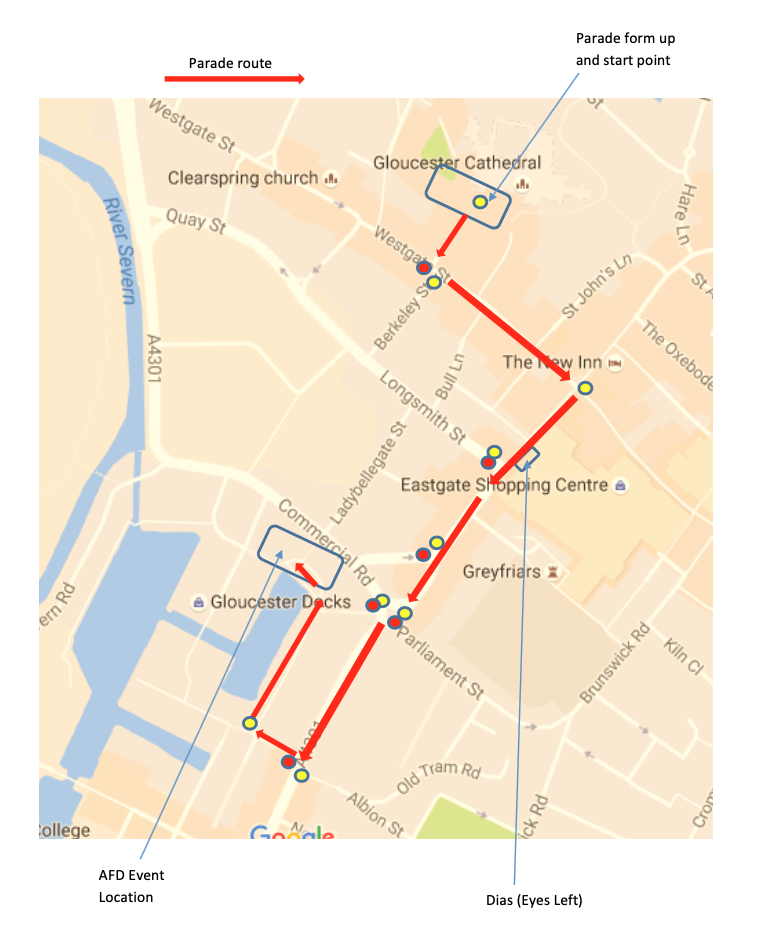